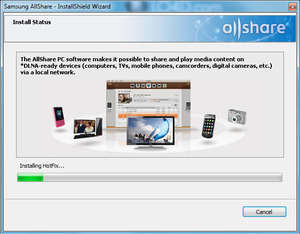 “A fast DLNA media sharing service made by Samsung”

A review of Samsung AllShare by Sven Sørensen

The huge growth of DLNA-compatible mobile devices and home theatre systems has created the necessity of running a media server. With Samsung Allshare, you can share your PC media with televisions, Playstation and Xbox devices, mobile phones and other hardware which provides access to your home network.

Samsung has create this program so that plugging into your media collection is as easy as installing the application. Allshare doesn't just work with Samsung devices, on the contrary, it works perfectly with Sony, Android, Nokia, Microsoft and many others.

This DLNA media server can share your music files, your digital photographs and albums and even multiple different video formats which may be played back on your own television screen if it supports DLNA (or via a third device, like a PS3).

This media server is fast and provides an intuitive interface.

Samsung AllShare is software which can stream media on DLNA devices.

This download is licensed as freeware for the Windows (32-bit and 64-bit) operating system on a laptop or desktop PC from media servers without restrictions. Samsung Allshare 2.1.0.12031_10 is available to all software users as a free download for Windows 10 PCs but also without a hitch on Windows 7 and Windows 8.

Since the publisher or product no longer exists, the download of Samsung AllShare is from the archive and therefore outdated; updates to this software should not be expected.

Compatibility with this software may vary, but will generally run fine under Microsoft Windows 10, Windows 8, Windows 8.1, Windows 7, Windows Vista and Windows XP on either a 32-bit or 64-bit setup. A separate x64 version may be available from Samsung.

Ranking in
Media Server Software
#2 of 24